Be Careful of These Two Words - by Keith Hafner

When dealing with kids (or really anybody, for that
matter...read: spouse), be careful how you use the
words ALWAYS and NEVER.

Have you ever had anybody, while upset with you, say,
"You know you ALWAYS (leave your sock on the floor;
forget my birthday; are crabby when you get home...)

"You NEVER (appreciate what I do; include me in your
plans; help with the chores)...

This kind of hyperbole creates a defensive reaction in the
person you are talking to. They immediately think (or say),
"That's not true! Don't you remember when I..."

And -- you've got an adversarial situation on your hands.
With your exaggeration, you've made it difficult for them
do focus on or discuss the point you are trying to make.

Instead, substitute words like "sometimes" and "occasionally"
as in: "Michael, SOMETIMES when I ask you to do something..."
Posted by Moderator: Master Vigil No comments: Links to this post

9 Ways to Achieve Your Goals 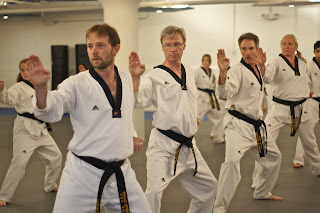 Hello Everybody! With New Year's right around the corner I thought I'd offer a little time tested goal setting wisdom. Some of it may be self explanatory, some of it may contradict other things you've heard - but it all works for me! Feel free to take what you want and leave the rest.

1) Set goals you're going to enjoy working on. Often people choose strategies to acheive their goals that aren't going to be any fun to execute. For example, your goal is to lose weight, but your strategy is to get up and run 3 miles on the treadmill every morning. If you loathe treadmills, and running hurts your knee this is the wrong strategy... and you probably won't be successful. Choose a strategy that's going to create enjoyment in the process.

The point of life is to enjoy it! If you don't enjoy the journey the destination may not be worthwhile.

2) Be honest with your self about what you can and cannot do. This is a knife that cuts both ways - don't sell yourself short, but also be careful not to set unrealistic goals.

3) Make your goals about you. Don't set goals that rely on you changing another persons behaviors.

4) Know how you're going to celebrate when you reach your goal. Make sure you make time for a victory dance! After you get done patting yourself on the back there will be plenty of time to set your next goal.

5) Guard your goals from anyone who will not be supportive. In the beginning it's easy to let one naysayer derail your freight train of success - so don't follow the tracks that lead to negative people.

6) Don't waste energy telling others what you're going to do. Do spend energy telling people how you did it. Some people say make your goals public, I disagree. Too many people are too full of talk. Also, see #5.

7) Figure out what behaviors support you, and what distracts you. For example, right now I have certain goals in Taekwondo that I'm working on. It requires a lot of time training, and so I've given up playing as much music as might like to make room for more TKD time. Guitar didn't support my goals, so I've let it go for now.

8) Don't be average. Don't do what other people are doing to reach goals like yours - DO MORE!

9) Fantasize. Spend time daydreaming, in as much detail as possible, about what it will be like when you reach your goal. Take a few minutes to live in that fantasy every day and soon it will become the reality.

I hope these little tips are useful to you! If they are, please share them with your friends.

I wish you all the success and happiness you can possibly handle in 2011!
Posted by Moderator: Master Vigil No comments: Links to this post

One of the most powerful mindsets you can have is "I deflect negative energy". It is the concept of not letting negative people or situations steal your joy, and it was a lesson recently reiterated to me by one of my mentors, Dave Kovar. It's easy advice to give, isn't it? The real trick is having strategies that help you apply it.

First off, avoid environments an 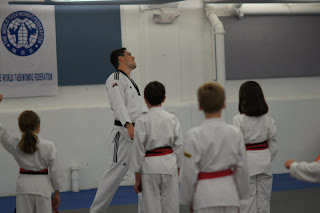 d situations that are likely to present negativity to you. Dave shares a great story about this. Years ago someone came into his Karate school asking about lessons in self defense. The gentleman had a black eye and stitches. He said he'd just been in a bar fight, and was on the losing end. "So," he said, "I need some self defense lessons because every time I go into that bar I get beat up." "Well," responded Master Kovar half jokingly, "Why don't you stop going to that bar?" "Oh," said the guy, "I never thought of that!" The question is: what "bars" do you need to avoid?

Next, just don't talk to, associate with, read facebook posts of, or take any notice whatsoever of negative people. Negative people are just that - negative. They are septic. They don't have nice things to say, and nothing you can say to them will turn them to the good. Just avoid them.

Lastly, control your focus. When you find yourself focused on negative energies, count your blessings. Focus on things that are true, noble, right, pure, lovely, or admirable... anything that is excellent or praiseworthy. Focus on things of "good report". That's good advice from another mentor of mine.
Posted by Moderator: Master Vigil No comments: Links to this post

I don't know if you guys know Donn Douthitt. Odds are you have probably seen him. Mr. Donn helps out with classes two nights a week here at the school, and often covers classes when Neil and I are out of town.

Of all my students, Donn is one of whom I am most proud. Why, you ask? Well...

Donn has been training with us for almost 5 years. He started back in the days when the school was on Five Mile Rd., and when the school had it's first employee, Brian. I remember three separate things that happened to Mr. Donn in the first few weeks of his training.

1) Donn, at around 50, was out of shape, and in those days I hadn't figured out how to train beginners. I pushed him extremely hard - harder than I would dare to push anyone now. He was hurting. You could tell.

2) It seemed like every class someone was bruising his shins and arms, and though he didn't complain it was obvious that he wasn't thrilled.

3) The biggest guy in the school kicked a white belt Donn in the mouth sending him to the E.R for stitches.

I think you'd agree, most people would have given up. In fact, I recall Brian saying, "I can't believe that Donn guy keeps coming! If anyone had a reason to leave..." But quitting just isn't Mr. Donn's way. Mr. Donn earned his black belt at our first black belt test a year ago.

Few of my students worked as hard as Donn did as a color belt. He was 100% rock solid on his attendance, often coming in to use the mat when the school was closed, and frequently meeting Mr. Tyler for one on one classes to improve his technique. He worked exceptionally hard, at times out training and out doing his younger counterpart, Mr. Neil.

Today I'm astounded at how good Donn has really become. His fitness, at 50+ is exceptional even for a 25 year old. His forms are very good. He has no fear (well, no paralyzing fear) of standing across from "the Master" in the ring. And, quite honestly, he might have a better grasp of Dan Holland's ground fighting than I do.

Additionally, Donn's support of the school, me and my family has never wavered. In three years of helping and teaching class, he has missed only TWO days.

But what I find the most remarkable about Donn Douthitt, is that he's accomplished all of this on the strength of his mental discipline. I don't think he'd mind me saying that he's not a natural athlete. Perhaps he's even the opposite. Donn, however, is goal-oriented and driven, rock-solid and consistent. He's become an excellent practitioner. He's a model martial artist, the students look up to him, and so do I.
Posted by Moderator: Master Vigil No comments: Links to this post

These kids get older? What?

Today I found myself in University Cafe on the U of M campus. It has been a long time since my last visit, but it was once a place I frequented. Happily not much has changed. You can still smell delicious home style Korean Food from a block away. The place looks the same, more or less - they've repainted with maize and blue theme, and added a Coke refrigerator, but it still has that "hole-in-the-wall" vibe I love. They still don't sell bottled water, they just have a big, bright yellow "Igloo" container with cold water in it. Get your own, don't pay for it.

The patrons, I'm glad to say, are still mostly Koreans. It's a sure sign to foodies that the fare remains authentic. Of course, this is U of M's campus and as such there is a smattering of people from all over the world. A guy with a clearly Eastern European accent, a German accent, an overweight, white haired American "dude" eats with an Indian friend. Probably a half a dozen cultures are represented in a tiny little cafe, all happily chowing down on bibimbab, bulgogi, rice or whatever. It's one thing I love about this country.

I didn't recognize the guy behind the counter taking orders. He's a young, handsome Korean kid, probably a student. I ask him who is cooking. He stammers, looking for the right answer.

And from out of the kitchen she walks... she recognizes me on sight. She and her husband (whose first name won't come to me) used to bring their son William to train with me at Master Kim's school. I don't recall how long he was there now, maybe a couple years. He was a good kid... 6 or 7 when he was there... and I always looked forward to seeing him and his parents. They are good people.

I still remember when they opened University Cafe. Remember it like it was yesterday, as cliche as it sounds. I remember being the only guy in there, and slowly watching it grow. Nowadays you have to share a table with a college kid if you want to sit down. American guy marries Korean lady, has two kids, opens Korean restaurant on college campus, watches kids and restaurant grow. It's story book stuff, and it's beautiful, don't you think?

Anyway, first question out of my mouth is, "How is William?" I'm racking my brain... is he in high school yet? Probably... or maybe not.

"Good!" she says, her voice thick with accent.
"How old is he now?" I ask, still racking my brain to place his age.
"21," she tells me, the number dropping like a bomb in my brain.
"TWENTY ONE?!" Wait, if he's twenty one he's a walking, talking, voting, drinking young man who probably has opinions, a job and a girlfriend! That's not right! He was just SEVEN... I mean, maybe I could see him being 14 or 15 now, but not twenty freaking one!

My next thought? How old am -I- now???
Posted by Moderator: Master Vigil No comments: Links to this post 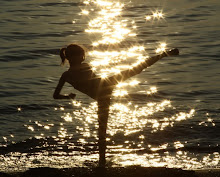 Practicing for Black Belt Camp on the beach. 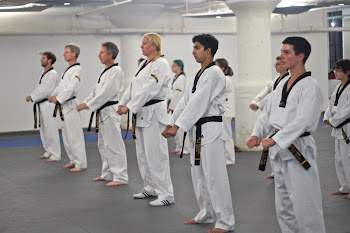 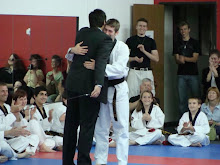 Getting ready for class at Dan Vigil's Academy of Taekwondo! 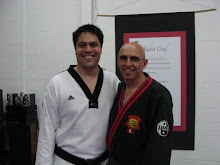 The Original Tae Kwon Do Guys